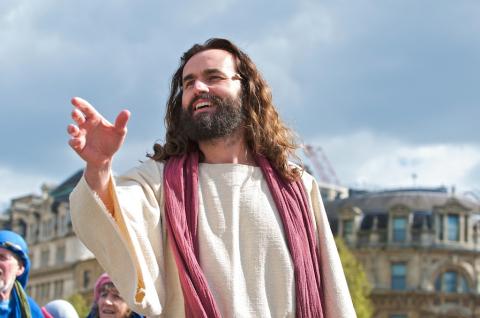 James Burke-Dunsmore is a writer, director and actor. He is a specialist in large-scale outdoor theatre and has worked on 125 plays. He has written 30 scripts, directed 35 plays and performed as Jesus in 70 productions. He has performed to over half a million people in many towns and cities in the UK, and abroad, and to millions on BBC television and radio programmes.

He has been involved with Wintershall’s plays since 1998, playing Jesus in both ‘The Passion of Jesus’ in Trafalgar Square on Good Friday, and the ‘The Life of Christ’ in June, and has also played Archangel Michael and Herod in the Wintershall Nativities.

James studied Scientific Illustration and Theatre Studies, went on to specialise in the study of animal behaviour, and is a multi award-winning fine artist.